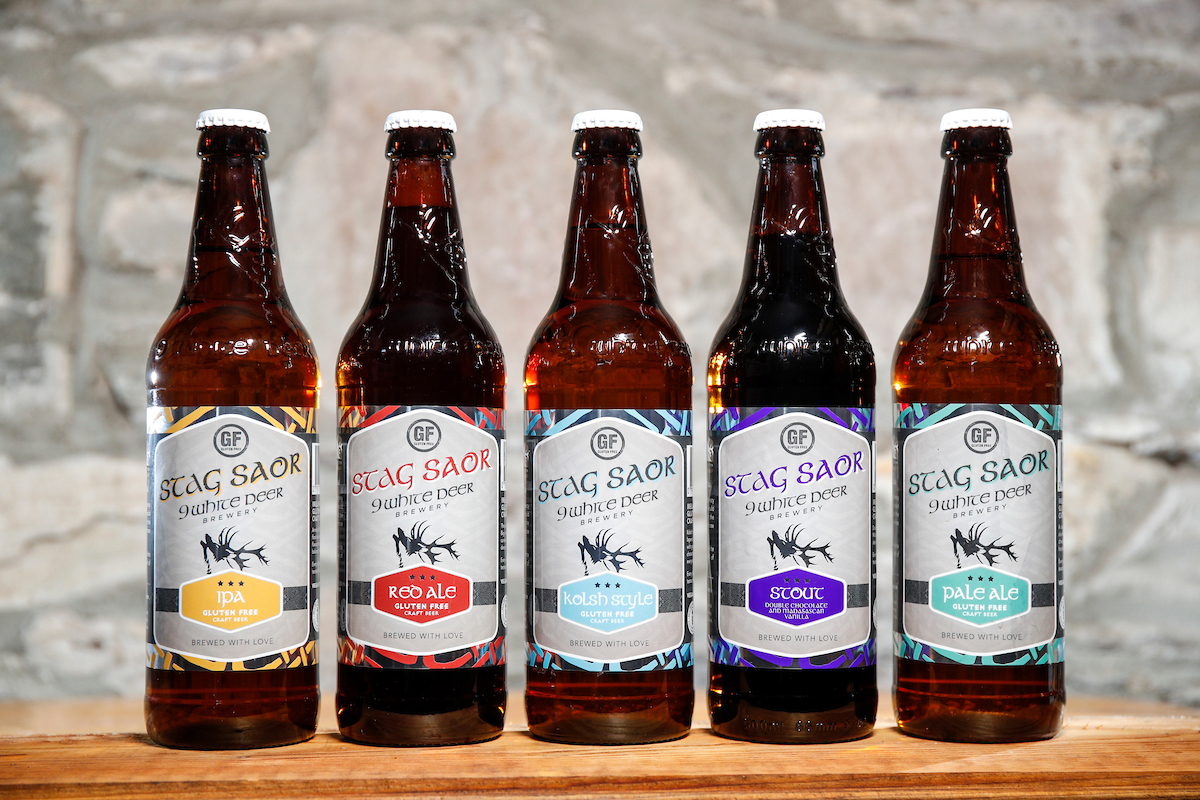 9 White Deer was founded by former marine engineer, Gordon Lucey and respected publican, Don O’Leary who runs the famous Mills Inn pub in Ballyvourney in 2014. The brewery initially offered a core range of four beers. Within the company’s first year, Don was diagnosed with a gluten intolerance, which essentially determined the direction for the business.

“At first the timing seemed terrible, we had just opened a craft brewery and I identified a gluten intolerance! However, the development of Stag Saor has changed everything for the business.  It prompted us to research the market and see how limited the beer offering is for those with gluten intolerance. There have been a very small number of gluten-free lagers and pale ales developed in Ireland over the last two years but, with options still very limited, we identified an opportunity to create a full range of gluten-free beers, which also taste really good,” Don O’Leary said.

Speaking about the launch of Ireland’s first gluten free stout, Kevin Kennedy, who writes the GiveMeGlutenFreedom.com blog said, “I am happy to report that this stout is really quite excellent. I was skeptical because I’ve been anticipating it for so long, but I’m thrilled to say that this is top quality. I am not easy to please when it comes to stout, and having to cut it out was something I nearly cried over when first diagnosed! So up until now, I’ve been ordering in bulk from the UK. No more. Now Ireland has it’s own, and it’s as good as if not better, than any bottled stout I’ve had in the past!”

Co-founder, Gordon Lucey began brewing at home in 1999 and has since become a qualified brewer. Gordon is responsible for bringing all of the 9 White Deer products from concept through to recipe design, formulating the process and brewing the final product.  He said, “We are determined to lead the way in breaking new ground for brewing in Ireland. It was critical to us that our gluten-free range, not only met the gluten-free requirements but also tasted great. Each batch of the Stag Saor range is independently tested and certified to maintain its excellence and to ensure that it complies with EU regulations of less than 20ppm of gluten. We regularly get the certificates back with less than 5ppm.”

The name, 9 White Deer, comes from a 6th Century fable in which one of Ireland’s most famous saints St Gobnait was told by an angel that she would set up an Abbey and a church on a site where she would come across 9 White Deer. That site is just one kilometer away from the 9 White Deer brewery, which now employs eight people, in Ballyvourney, Co. Cork

Stag Saor is available nationwide from Classic Drinks and also in Dublin from CBG Wholesale. For a full list of stockists visit www.9whitedeer.ie.

A Whole New Us

This website uses cookies to improve your experience while you navigate through the website. Out of these, the cookies that are categorized as necessary are stored on your browser as they are essential for the working of basic functionalities of the website. We also use third-party cookies that help us analyze and understand how you use this website. These cookies will be stored in your browser only with your consent. You also have the option to opt-out of these cookies. But opting out of some of these cookies may affect your browsing experience.
Necessary Always Enabled
Necessary cookies are absolutely essential for the website to function properly. This category only includes cookies that ensures basic functionalities and security features of the website. These cookies do not store any personal information.
Non-necessary
Any cookies that may not be particularly necessary for the website to function and is used specifically to collect user personal data via analytics, ads, other embedded contents are termed as non-necessary cookies. It is mandatory to procure user consent prior to running these cookies on your website.
SAVE & ACCEPT