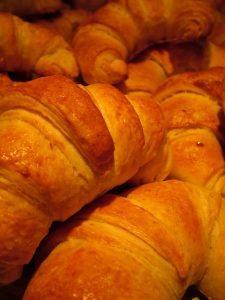 The first words my college doctor said to me when I came to get the results of my blood test. It was actually a pretty good way to break the news, especially as I’d only gone along because the pain in my joints was interfering with my zumba!  I left the doctor’s office with a letter for the endoscopy department in my hand and instructions to keep eating gluten.

From that moment on I decided that I would have myself a “Goodbye Gluten” party and eat all of my favourite foods that just happened to contain gluten.  My “party” was more of a few weeks of pure indulgence. I said yes to that packet of Doritos, and I ate that one extra custard cream, and as for croissants and Brioches, well they were just what the doctor ordered.

As most of us know the Endoscopy is an altogether odd experience, and the only thing I could do to prepare myself for it was do what everyone seems to: I googled it. Googling anything can go either way, one you end up on YouTube watching animal videos or two, you can actually find some useful information.  Suffice to say there are some truly great sloth videos out there. On E day I was given some kick-ass sedation, so even though I could see my own intestine on screen, all I could think about was how awkward it was that the hot doctor could see it too, and how hungry I was.

Next on my to do list was to Google celebrities with Coeliac Disease.  For some reason finding beautiful, rich, successful people in the same boat makes you feel better.  (Cue spirited and somewhat out-of-tune rendition of  You Are Not Alone)  And let me tell you I have found my spirit animal in Zooey Deschanel, not only is she a Coeliac but she is the star of one of my favourite shows “New Girl”

At the start of summer I booked myself a holiday to Spain to meet my friend who was over there learning Spanish.  Never did I think that I would have to do so much planning for just ten days of sun, sea and sand!  First there is the fear, you worry about “The Horrors of Cross Contamination”, the delayed flight

and the fear of going hungry in a gluten-rich airport, and that’s before you’ve even left the country.

But more about my Spanish adventure next time.

In the meantime I’ll leave you with this question

“Is there a dating website for Coeliacs, and if not should there be?”
Thanks to Robyn, our Guest Blogger!

Robyn Is a 19 year old psychology student who has been living gluten free for just two months. She enjoys baking, (ironic much?), watching tv, acting and dancing.  She writes about  being a coeliac in a world filled with gluten.