You are here: Home / Baking / The Perfect Pancake 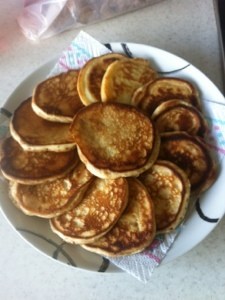 The Internet abounds with literally thousands of pancake recipes including egg free, flour free and milk free plus the many ingredients added to make all sorts of tempting sweet or savoury dishes.

The original pancake is thought to date back to Ancient Greece with each country now hosting its’ own variation.
Pancake Day, or Shrove Tuesday is the day before Lent, also known as Fat Tuesday, when people would enjoy a feast or fatty foods before 40 days of Lent, which includes cutting out particular foods or fasting.

For the health conscious, fruit or gluten free protein powder can be added for a tasty snack as part of a healthy diet. For others, lemon juice and sugar soon gives way to marshmallows, chocolate and cream.

The really important part of Pancake Day (apart from the eating) is of course, tossing a pancake. The secret to successfully tossing a pancake is velocity. With enough upward motion, the pancake will leave the pan, flip over in the air and allow you to simply hold the pan while it lands. Too little velocity and the pancake will partially flip, potentially causing parts of it to stick together. Too much velocity and your kitchen ceiling will be beautifully adorned for as long as it takes the pancake to cool and lose any adhesive properties it once had.

As a guide, if you can flip a pancake in fewer than fifty tries, you’re more capable than a robot:

If you want to set a record by tossing pancakes, there are quite a few to choose from, but the individual record goes to Australian Chef Brad Jolly with a whopping 140 flips in 60 seconds.

To pick a record to challenge (including the fasted marathon while flipping a pancake) go to www.guinnessworldrecords.com/news/2013/2/flipping-amazing-seven-of-the-best-pancake-day-records/ 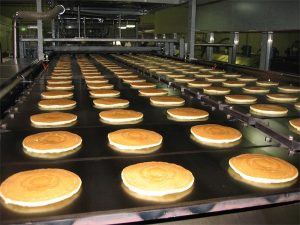 On an industrial scale, engineers quickly realised that thousands of robotic arms flipping pancakes could be a disaster if they ever lost control and instead opted to cook both sides of the pancake at once, as seen in this giant pancake conveyor built by TSA Griddle Systems.

Don’t worry if you still can’t toss a pancake successfully though, simply cheat and use a spatula.